Edit this guide on GitHub

Comcast ’s involvement in open source was a gradual process that evolved over time. The company eventually created two open source program offices, one for the NBC business and another for the cable side of the business, which is the subject of this profile.

Comcast began contributing to open source around 2006 when Jon Moore, Chief Software Architect, made a patch contribution to Apache HTTP. He showed the management team that it was more cost effective to have the patch incorporated into the main project than it was to maintain it separately.

Working with an interdisciplinary team, Moore worked to set up an open source advisory council, which consisted of legal and technical subject matter experts. They reviewed contributions and created internal guidelines focused on good open source practices and community building. In 2013, when they started tracking these contributions, they had 13. This year, they plan to do almost 10x that.

“When companies establish open source practices they send a big message saying that we’re serious about open source and that we want to invest in it.”* – Nithya Ruff, Senior Director Open Source Practice at Comcast.

In 2016, Comcast hired Ruff to lead an increasingly vital open source strategy. The practice has support from the highest levels of the Comcast leadership team who wanted an organization that would field questions, educate employees, and create awareness.

The open source program practice currently has three full-time people while relying on functional experts in legal, engineering, IT, PR, and more to help scale the programs. The goal is to coach, guide, advise, recommend, and serve as a consultant to employees. Ruff summarizes the function of an open source practice with “the six C’s”: consumption, contribution, compliance, communication, collaboration, and competency-building. 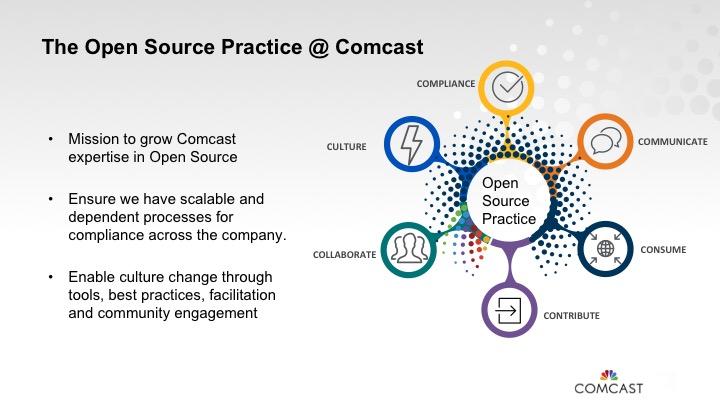 Comcast has open sourced a few projects in addition to contributing significantly to existing open source communities, like OpenStack. Apache Traffic Control was started within Comcast and has been contributed to the Apache Software Foundation where it is currently in incubation.

They were also instrumental in setting up an independent consortia called the RDK Management Project focused on creating a standard around set-top boxes. The RDK software uses the Yocto build system to create a consistent layer such that everyone from the semiconductor vendors right up the chain to OEMs and ISVs can use a consistent system and structure to build the content for set-top boxes and similar devices.

Comcast open sourced its Speed-TestJS tool , which is a test of internet speed, because the company wanted to be transparent to the world in terms of how they measure speed. The project also allows people to use the tool themselves to make sure that they felt that Comcast was delivering what it promised. This is a great example of a tool that could create more trust as a result of being open.

In addition to contributing to projects, Comcast is also a member of a number of foundations, including Cloud Foundry Foundation , the Apache Software Foundation , The Linux Foundation , Yocto Project , Linaro , OpenStack Foundation , Open Network Automation Platform (ONAP) , and OpenDaylight . 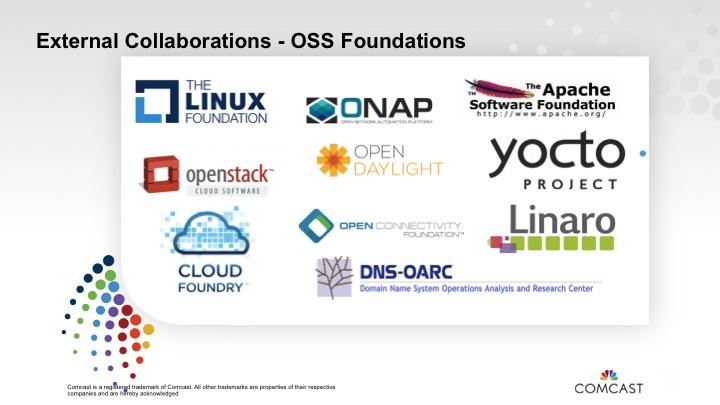 Aligning with the Business

“The establishment of the practice, visible engagement at the foundation level, increased contributions, leadership support, and tooling support as a company have made it easy to do open source.*” – Nithya Ruff, Senior Director Open Source Practice at Comcast.

These resources were created in partnership with the TODO Group: the professional open source program networking group at The Linux Foundation. A special thank you to Pam Baker for writing assistance and the open source program managers who contributed their time and knowledge to making these comprehensive guides. Participating companies include Autodesk, Comcast, Dropbox, Facebook, Google, Intel, Microsoft, Netflix, Oath (Yahoo + AOL), Red Hat, Salesforce, Samsung and VMware. To learn more, visit: todogroup.org.